In America, it is generally conceded that Methodism first shed its light in the city of New York. About the year 1765, a plot of ground on John Street was leased and two years later purchased to build the first chapel. During the entire early struggle of the new organization, Black people figured prominently in Methodism and shared in devoting this building for the first organization. Between 1765 and 1796, the number of Black members increased greatly. With increasing numbers, a caste system developed which included forbidding Black members from taking the Sacrament until all White families were served. This and the desire for other church privileges denied to them induced Black members to organize among themselves.

The first church, organized in 1796 and built in 1800, was called Zion. Among the leaders of the movement was James Varick, who was the first Bishop and considered the founding father of the Zion Church. The Zion church was incorporated in 1801 with the name “The African Methodist Episcopal Church in New York.” Methodist Episcopal was always in the title to exhibit the retention of the doctrine and form of church government under which the denomination originated. “African” was prefixed to the rest of the title of this church because it was to be controlled by descendants of Africa, in the interest of humanity, regardless of race, color, sex, or condition. Because another organization of black Christians, who experienced similar treatment from the white Methodists in Philadelphia, came into existence around the same time, adopting the exact name, creating much confusion, the General Conference of 1848 voted to make “Zion” a part of the denominational name, henceforth, to be known as the African Methodist Episcopal Zion Church. From the very outset the Zion church has been in the forefront in the battle for full citizenship and freedom in this country. The AME Zion Church encompasses all of the United States, Canada, Caribbean Islands, England, Africa, India, and South America, and is under the supervision of 12 elected Bishops. The New York Conference, of which we are a part, is a part of the North Eastern Episcopal Area. This Episcopal Area includes New York, Western New York, New England, and The Bahamas conferences.

Through the years the AME Zion Church has provided educational opportunities for young people by establishing schools on a secondary as well as college level. Full-time educational programs continue to be offered by Livingstone College in Salisbury, North Carolina; Hood Theological Seminary, also in Salisbury, North Carolina; Clinton Junior College in Rock Hill, South Carolina, Lomax-Hannon Junior College in Greenville, Alabama; and The AME Zion Community College, Monrovia, Liberia, West Africa. In addition to its educational focus, the African Methodist Episcopal Zion Church is noted for its active participation in the abolition of slavery. Numerous persons in the history of the African American movement have been members of the church. It is important to note that Harriet Ross Tubman was a member of the AME Zion Church and donated her property in Auburn, NY, to the AME Zion Church. Other prominent members who advocated social justice include Frederick Douglass, Sojourner Truth and Paul Robeson and Bishop Alexander Walters, co-founder of the NAACP.

The Reverend Mark Bell organized the Women’s Home and Overseas (formerly Foreign) Missionary Society in 1880 in Montgomery, Alabama. Active membership in this great body includes all women of the AME Zion Church who through contributions and participation in the work of the Society indicate an interest in the cause of world evangelism. Membership, however, is not restricted to women alone. Men may become honorary members without voting privileges.

The Bishop of each Episcopal area selects someone to serve as the Missionary Supervisor. The Bishop of the Annual Conference of which the District is a part appoints the District Workers. The New York Annual conference has three (3) Districts: New York City District, Westchester District, and the Long Island District.

You can learn more about us here:  About the AME Zion Church

African- indicates that the church is governed by people of African descent, but there is no distinction made in the Church by virtue of race or color.

Episcopal- this is the form of government adopted by the church and includes Bishops and Elders.

Zion – the name represents the Church of God in Scripture and was adopted to distinguish the group from other churches, especially the AME church founded in Philadelphia. 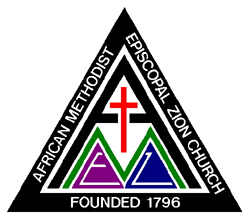 The Triangle – representing the God Head: the Father, the Son and the Holy Spirit, called the Holy Trinity, forms the equilateral triangle.

The Ecclesiastical Color – Sign of the mood of a church festival. Within recent years the interpretation of black has changed to encompass a texture the whole life –all colors blended, melted together – joy, sadness, struggle, faith, hope, and finally, life eternal.

The Red Cross – Is used with power, love, glory and honor as associated with our Lord’s passion, suffering, and Christian zeal.

The Latin Cross – Is one of the most accepted symbols of Christianity the world over. The plain cross empty symbolizes, “He is not here. He has risen victoriously.”

“A” – The letter A (African) in black represents our African background and suggests the cradle of civilization from whence comes all races, colors, and creeds.

“E” – The letter E (Episcopal) means we are a church overseen by Church Fathers and Mothers, called Bishops. Purple, so often worn by our episcopacy, denotes kingly authority in Godly judgment, the union of love and pain in humility.

“M” – The letter M (Methodist) refers to the doctrine about God and Christ to which we adhere. It is in green, the universal color of growth, progress, and hope.

“V” – Widely used symbol of victory. The “V” represents a church born victoriously under the leadership of James Varick, our first Bishop.

“Z” – The letter Z (Zion) represents God’s holy hill. It stands for our branch of Methodism which is a separate entity from our sister churches like: AME, CME, and ME. True to God, “true blue”, it is symbolic of heaven and sincerity.

Go back to Who We Are